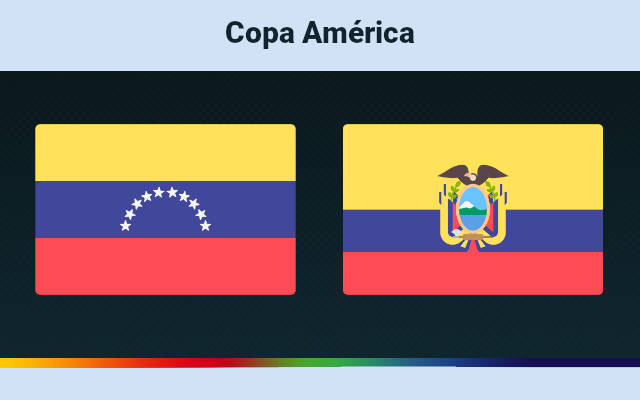 Venezuela and Ecuador will face off in Rio de Janeiro on Sunday, hoping for their first Copa America 2021 victory.

The Vinotinto moved to third place in their second group after earning a goalless draw against Colombia.

But it was nothing more than another dreadful performance from Jose Peseiro's team, as the Colombians were stationed inside Venezuela's penalty box for the entire 90 minutes. In the end, the 25-odd chances were insufficient to produce a winning goal, with goalkeeper Wuilker Farinez making some incredible saves.

Ecuador will play their second match on Sunday after falling to Colombia by a narrow 0-1 score on matchday one. They have a chance to pick up three points here before facing Peru and accidental hosts Brazil in back-to-back games.

Ecuador is unbeaten in the last six meetings with Venezuela, with three wins and three draws.

Their most recent two meetings were friendly games, both of which ended with the same 1-1 full-time score, with the most recent game taking place in June 2019.

However, when the teams met for the final time in the Copa America in 2011, Venezuela won 1-0.

Only two of their last seven games have seen over 2.5 goals, despite the fact that both teams scored in three of them.

Despite narrowly losing to Colombia, Ecuador performed admirably. They limited their opponents' chances, and the lone goal came from a brilliant set-piece routine. However, improvements must be made in the attacking third, which has produced very little as well.

Prior to this tournament, the Tricolor had lost back-to-back games to Brazil and Peru, both of whom they will face in the group stage. However, their previous four games were all victories, one of which was a resounding 6-1 victory over Colombia.

At the same time, it is worth noting that they have only failed to score twice in the last seven games.

A 2-1 victory over Chile in November 2020 is the only positive result for this Venezuelan team since football resumed after the Covid-19 pandemic. During this eight-match stretch, they lost five games and drew five.

The worrying aspect is their attacking front, which scored in only two games during this time period.

Prediction for Venezuela vs. Ecuador

So far, the Copa America has seen some very disappointing performances, but the most bizarre has been Venezuela's 0-0 draw against Colombia.

This team manager, Jose Pesario, appeared clueless for the majority of the game, but was saved by some brilliant saves from Wuilker Farez in goal.

Ecuador is a hardworking team that likes to keep possession of the ball and create chances with deft touches from their talented midfielders.

In general, this could be enough to score a goal or two, while I trust their defense to repel any Vene attack.

Keep an eye on Gonzalo Plata, who shone in Ecuador's first game. The Sporting CP midfielder is known for his tireless runs and quick feet, which allow him to break open deep sitting defenses in the blink of an eye.