Denmark vs. the Czech Republic in the Euro 2021 quarterfinals in Baku, Azerbaijan, is the tournament's last true hope for tournament chaos.

Denmark is ranked 10th in the world, while the Czech Republic is ranked 40th, and one of these teams will compete in the Euro 2021 semifinals at Wembley Stadium in London. The winner will face either England or Ukraine.

With a slew of players from top clubs across Europe, many tipped Denmark as a pre-tournament dark horse. The Danes have already pulled off a miraculous run to a Euro title back in 1992, and this team exudes some of the same good vibes, especially after the traumatic experience involving star Christian Eriksen, who survived a cardiac arrest episode in the first match.

To get to this point, the Czechs have relied on teamwork, patience, disciplined organization, and defensive commitment. Patrik Schick (below), who is vying for the tournament's top scorer award, has been their game-changer. They've also taken advantage of opportunities that have come their way, such as the red card given to the Netherlands in the previous round.

Denmark coach Kasper Hjulmand told Danish media that he would "rather have played the Netherlands" in the quarterfinals. This is because he knows the Czechs can match his team's intense pressing and work ethic, which should make for an exciting high-stakes match. 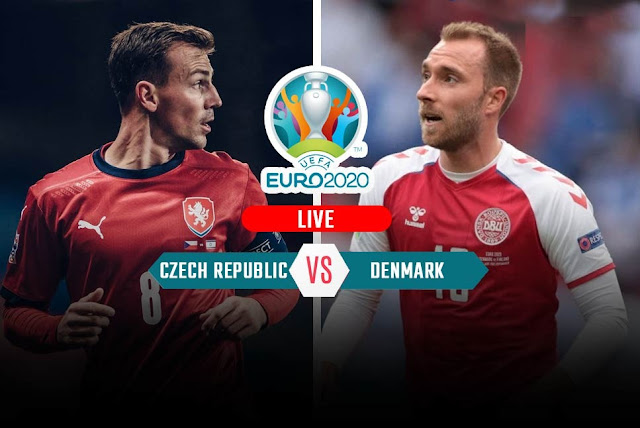 What is the best way to watch Denmark vs. Czech Republic?

Lineups for Denmark and the Czech Republic are expected to be released soon.

The intriguing decision that Denmark must make in this game is whether to stick with the hot hand and keep Kasper Dolberg (2 goals vs. Wales) as the starting forward. Or will Yussuf Poulsen, who is back from injury, reclaim his starting spot? Even if Poulsen can play out wide, it's difficult to see both of them starting.

Dolberg (below) should get the nod because his quick reactions in the box could be decisive against a Czech team that will crowd the box. Dolberg doesn't need much room to wreak havoc.

In a similar vein, it's difficult to see right winger Daniel Wass reclaiming his starting spot after recovering from illness. Jens Stryger Larsen performed admirably in his absence against Wales.

The Czechs will also be without captain Vladimir Darida and left-back Jan Boril. Despite the fact that their replacements, Antonin Barak and Pavel Kaderabek (who primarily serves as a right-back), performed admirably against the Netherlands, the regulars are expected to be reinserted into the starting XI. Off the bench, Barak should provide an attacking boost.

Denmark vs. the Czech Republic: Predictions and Odds

These two teams have met four times in the last decade, with three draws and a 3-0 Denmark victory. However, the most recent meeting was in 2016. That history reinforces the notion that there won't be much of a difference between them on Saturday.

The Czechs, on the other hand, know how to keep things tight. According to FBref stats, they limited the Euro powers to expected goals of 0.8 and 0.9 in their last two matches against England and the Netherlands, respectively.

So it'll be another nail-biter on Saturday. The difference will be determined by which team is capable of producing a moment of brilliance. The Czechs have Schick, but the attack-minded Danes (who average 19 shots per game) simply have more players like Schick who can improvise and make a big play. Denmark's last two games have resulted in four goals.

Given the foregoing and the likelihood that Denmark will take the initiative, the odds for "Denmark to score first and win" appear to be the most appealing play for this game.

Denmark 2, Czech Republic 1 is the prediction.