The UEFA European Championship 2020 has reached its culmination after four weeks of drama, tension, and intense action, with Italy and England facing off in the final on Monday night at London's Wembley Stadium. While both clubs beat odds and forecasts to reach the finals, only one of them will go down in football history.

The Italians, led by Roberto Mancini, have produced some outstanding performances, defeating World Number One Belgium in the quarterfinals and much-fancied Spain in the semis to secure their place in the mega tournament. Italy will go into the match as the favorite.

England, on the other hand, had a fantastic effort to qualify for the finals and will be hoping to bring home the elusive trophy by winning the huge event. After overcoming Denmark in the semi-finals, the Harry Kane-led team advanced to the final. 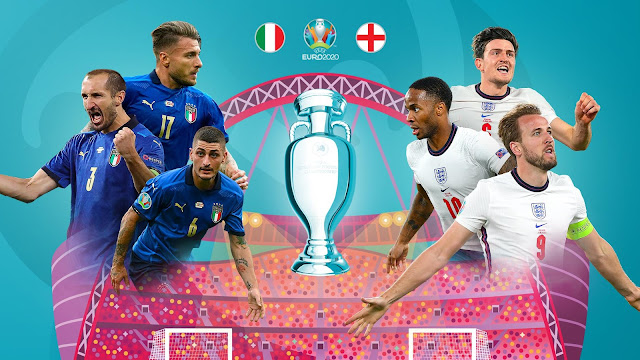 Italy vs England in the UEFA Euro 2020 Final: Team News and Injury Update

During Spain's semi-final encounter against Italy, Juventus winger Federico Chiesa suffered an injury. The 23-year-old, on the other hand, was seen exercising with the team and is anticipated to start the match against England. Meanwhile, Leonardo Spinazzola of AS Roma has been ruled out of the Euros owing to an Achilles injury. Emerson Palmieri of Chelsea is slated to start in Spinazzola's absence.
England's offense will be led by Manchester City midfielder Raheem Sterling and Tottenham Hotspur striker Harry Kane against Italy on Monday night. Meanwhile, Jadon Sancho, Jack Grealish, Phil Foden, and Bukayo Saka will compete for the team's lone position. In the back, Harry Maguire and John Stones are expected to maintain their partnership, while Declan Rice and Kalvin Phillips will man the midfield.

Starting lineups for Italy vs England

When does the UEFA Euro 2020 Final between Italy and England begin?

The match between Italy and England will take place at Wembley Stadium in London on Monday at 12:30 a.m. IST.

What TV channel will broadcast the UEFA Euro 2020 Final between Italy and England?

In India, the match between Italy and England will be televised on Sony Sports Network.

How can I watch the UEFA Euro 2020 Final between Italy and England online?

On the SonyLIV app, you can watch the match between Italy and England live.