Argentina - Venezuela live: how to watch the game for free via mobile app and streaming

Venezuela vs. Argentina LIVE ONLINE | LIVE on matchday 9 of the Qatar 2022 Qualifiers, this Thursday, September 2 from 7:00 pm (Peruvian time). The transmission of one of the most attractive matches today will be in charge of Movistar Plus, TyC Sports, and La Tele Tuya. To watch live football like this match, you have different alternatives for streaming services and TV channels.

Led by Lionel Messi, the current champion of America, Argentina, will visit a Venezuela that will present an interim coach after the goodbye of José Peseiro and with a plague of casualties. Follow minute by minute, statistics, incidents, goals, interviews, and results of the match that will be played at the Olympic Stadium of the Central University of Venezuela.

On the bench of the 'Vinotinto', the Venezuelan Leonardo González will sit as interim coach, who had to make a call based on a previous list drawn up by Peseiro and his team. 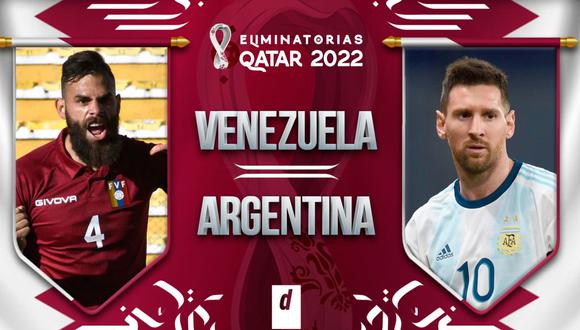 Fernando Aristeguieta (captain in the last Copa América), Darwin Machís, and Yordan Osorio subsequently fell from the final squad, all of them due to different injuries that prevented them from being present. Neither will Salomón Rondón, the new reinforcement of Everton in the Premier League.

The replacements have been Jan Hurtado, from Red Bull Bragantino; Freddy Vargas, from the American FC Dallas;, and Jhon Chancellor, from the Italian Brescia Calcio.

González will direct his first game as interim coach against Argentina and must find his own style for a team that was finding its system under the leadership of Peseiro, highly appreciated by the fans and that had managed to form a united group of footballers.

The team is in the ninth position in the South American group and has only achieved one victory, against Chile, and a draw with Uruguay.

For his part, Argentine coach Lionel Scaloni joined his entire squad, although as it is a triple date it is foreseeable that he will rotate his players to give them rest.

Cristian Romero and Leandro Paredes are out against Venezuela due to suspension and the DT will have to decide whether to start Leo Messi or reserve him for Sunday's game against Brazil. “There are three games in a few days and you have to manage the forces. We must also be attentive to the yellow ones. In any case, we will always put what we think is the best, ” said the coach. He also stressed that after the Copa América “a new challenge begins” and that all teams “will want to beat the champion”.

It is worth mentioning that the 'Albiceleste' is second in the classification with 12 points obtained in three victories and three draws.