The inaugural El Clasico of the 2021-2022 season will take place at Camp Nou in Barcelona. Given Barça's recent troubles, the two teams appear to be headed in separate directions, but the reality is that Koeman's side is only two points behind Madrid in the table, and they are still very much in contention for La Liga.

With their impressive 0-5 win against Shakhtar last Tuesday, Los Blancos gained a lot of confidence and energy, and they will be eager to continue that form tonight. Barça, on the other hand, will present a different type of challenge to Madrid's defensive line. Madrid has struggled to keep clean sheets so far this season, but Ferland Mendy's return to the starting lineup will undoubtedly help.

On the other side, Benzema and Vinicius have been one of the top-scoring duos in European football, and Barcelona has struggled defensively as well, so Ancelotti will be looking for another brilliant performance from his two attacking players tonight.

El Clasico is not to be missed!

WHERE CAN I WATCH AND STREAM EL CLASICO 2021?

Barcelona's Camp Nou is the site of the match.

ESPN+ and Movistar La Liga are two of the television channels available.

ESPN+ is available for streaming. 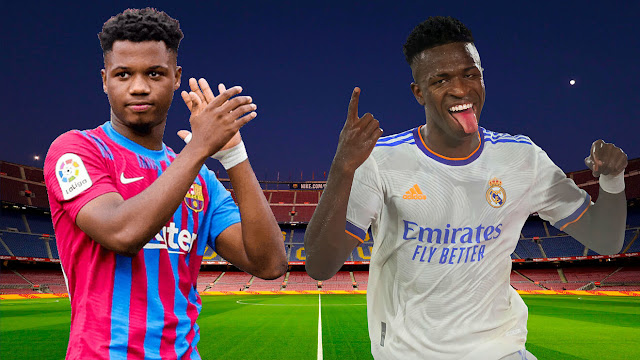 Outs and doubts for Real Madrid include Gareth Bale, Isco, Luka Jovic, and Dani Ceballos (out)

Barcelona returns to action for the biggest game in the world as they welcome Real Madrid to the Greatest Stadium on Earth for what is expected to be the largest crowd at Camp Nou in nearly 20 months following a hard-fought 1-0 victory over Dynamo Kyiv to keep them alive in the Champions League group stage.

Barça opened a vital week with two significant victories against Valencia and Dynamo Kyiv, but the performance against Kyiv was troubling and doesn't generate a lot of confidence for this match, especially given how well Los Blancos are playing. They've only won one of their last three games.

Madrid's midfield is still key to their success, and David Alaba has been a perfect match in defense. I hate to say it, but Madrid is a heavy favorite heading into this match. However, Barça will be playing at home and will love the opportunity to play the underdog and come out on top.

At this time, my feelings against Ronald Koeman are quite clear, but I want him to succeed and coach a fantastic game to lead us to victory. Nothing else matters when it's El Clásico time. If we win El Clásico, the financial issue, the coaching crisis, and everything else that generates stress at the club will go away for at least a few days.