On Thursday, October 7 at the Dubai International Cricket Stadium, Chennai Super Kings will face Punjab Kings in Match No.53 of the 2021 Indian Premier League. In the T20 tournament, the Super Kings, led by MS Dhoni, have already advanced to the playoffs.

They have yet to clinch a spot in the top two, as the Royal Challengers Bangalore can still knock them out of second place. Dhoni's team has lost two games in a row and is in a state of flux heading into their last league match. The Delhi Capitals defeated them by six wickets in their previous match.

On the other hand, the Kings, led by KL Rahul, are gasping for air at the bottom of the standings. If they lose their next game, they will be eliminated from the T20 league. They must not only win but win by a large margin in their last group game to have any chance of making the playoffs.

Chennai Super Kings take on Punjab Kings in the 53rd match of the season. 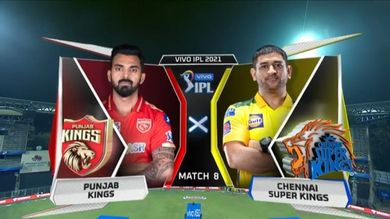 In Dubai, the batting surface has been fantastic. The bowlers, on the other hand, have had their say in the last two games. The spinners' performances will be significant, but not overwhelming. For both sides, batting second should be the way to go.

In this tournament, KL Rahul has been brilliant for the Kings. The right-hander has 528 runs at an average of 52.80 and a strike rate of 129.09 in 12 games. He has an ominous look after smashing five half-centuries. He scored 39 runs in the last game against RCB, yet his efforts were in vain. He intends to perform well in the crunch game.

In the latest round of the IPL, Dwayne Bravo has been outstanding for the Super Kings. In eight games, the West Indies all-rounder has taken 12 wickets at an astounding economy rate of 6.93. He bowled in the 18th over of CSK's previous game against DC, keeping his team in contention for a win. The veteran will try to keep CSK in the top two spots by delivering.