BAN vs. WI Fantasy Cricket Tips, Dream11 Predictions West Indies vs Bangladesh Dream11 Team, Playing XI, Pitch Report, and Injury Update for the ICC T20 World Cup 2021 match. In this tournament, they will be pitted against each other for the first time.

On the 29th of October, West Indies will play Bangladesh in the 23rd match of the ICC T20 World Cup 2021 at the Sharjah Cricket Association Stadium.

This game is set to begin at 3:30 p.m. IST, and live coverage will be available on Star Sports Network, with live scores available on the Footballrocker website. 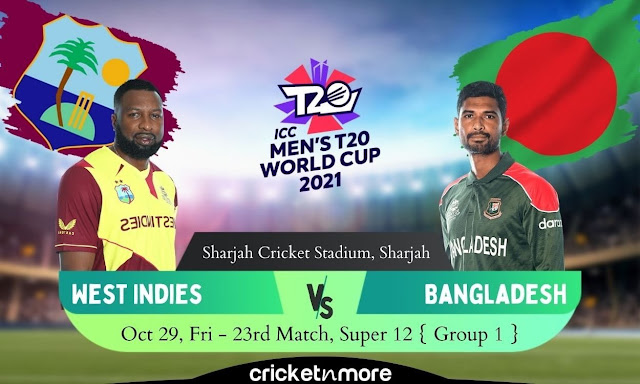 Bangladesh, on the other hand, recently played England at the Sheikh Zayed Stadium, where England defeated them by 8 wickets. Bangladesh could only muster 124 runs while batting first, which England was able to chase down in the 14th over. None of their hitters appeared to be in good shape.

These two clubs are currently ranked near the bottom of the points standings. The team that loses this game will almost certainly be eliminated from the playoffs.

On matchday, the temperature is forecast to be approximately 32°C, with 44 percent humidity and a wind speed of 14 km/hr. During the game, there are no chances of rain.

The Sharjah Cricket Association Stadium provides a neutral pitch where both departments are expected to benefit from the surface in some way. In the middle overs, spinners can be dangerous, while pacers can be useful in the death overs.