Pakistan versus Scotland Dream11 Prediction, Fantasy Cricket Tips, Dream11 Team, Playing XI, Pitch Report, and Injury Update for the ICC T20 World Cup 2021 match between Pakistan and Scotland. In this tournament, they will be pitted against each other for the first time.

Pakistan will play Scotland in the 41st match of the ICC T20 World Cup 2021 on November 7th at the Sharjah Cricket Association Stadium.

On the 7th of November, unbeaten Pakistan will face winless Scotland in the 41st game of the ICC T20 World Cup 2021 at Sharjah Cricket Stadium. This will be both teams' final group stage match.

With four wins in a row, Pakistan has already qualified for the semi-finals. Scotland, on the other hand, has lost four games in a row and is currently ranked last in the points standings. 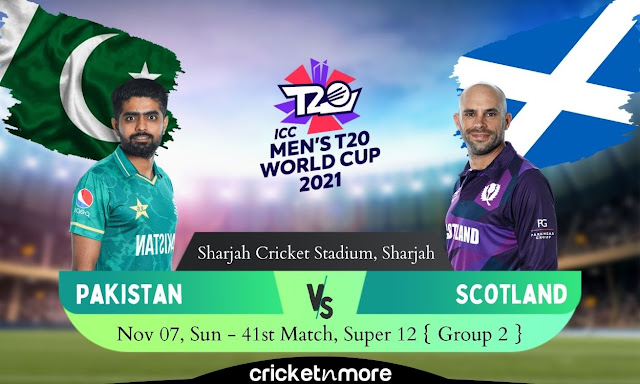 Pakistan's most recent match was against Namibia in Abu Dhabi, which they won by 45 runs. After winning the toss, Pakistan chose to bat first. They put together another century stand for the first wicket, amassing 189 runs for the cost of only two wickets. Mohammad Rizwan scored an undefeated 79 off 50 deliveries, while Babar Azam amassed 70 runs.

Hafeez came in late for a 16-ball 32-run cameo. The Pakistani spinners limited Namibia to 144 runs for the loss of five wickets. The only wicketless bowlers in the team were Shaheen and Hafeez.

Scotland, on the other hand, met India in their second-to-last group stage match at Dubai International Cricket Stadium, where they were thrashed in a lopsided defeat. Scotland, batting first, was bowled out for just 85 runs. The only batters to reach the 20-run mark were Munsey (24) and Leask. India batted fiercely, chasing down this total in just 39 deliveries, claiming the third-fastest victory over a team in a World Cup match.

KL Rahul also made the second-fastest half-century by an Indian, scoring 50 in 18 balls. However, towards the finish, Bradley Wheal and Mark Watt each got a wicket.

In this format, these two teams have met three times, with Pakistan chasing them down each time. Pakistan last played a two-match T20I series in Scotland in 2018, winning both matches by 68 runs and 84 runs, respectively.

With no other options for these teams and the game's outcome being unimportant, Scotland will be aiming to avoid going home empty-handed. Pakistan, on the other hand, would be looking to test out their bench players ahead of the major semi-final match.

The youthful Scottish team will have a lot to learn from the seasoned Pakistani team. This exposure to big clubs on such a large stage will aid them and their players in improving over time.

On matchday, the temperature is forecast to be around 28°C, with 48 percent humidity and an 8 km/hr wind speed. During the game, there are no chances of rain.

The Sharjah Cricket Association Stadium provides a neutral wicket, and both departments are expected to benefit greatly from the surface. Once again, spinners can be dangerous in the middle overs.

Chasing teams' records: The team batting second has a poor track record in this match. On this track, they have a 40 percent winning percentage.